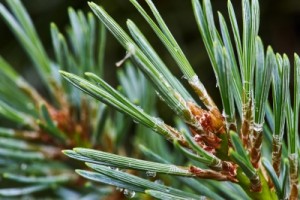 Pine mulch can be an excellent addition to every garden to improve its look, increase water retention, and reduce weeds. It is a natural mulch created from pine trees that comes in two forms: pine straw and pine bark. Pine straw is when pine needles are used as mulch, whereas pine bark is when the bark is cut into nuggets to be used as mulch.

Advantages and Disadvantages of Pine Straw

Pine straw is one of the cheapest forms of mulch because pine needles can be raked up from under almost any pine tree throughout most of the year. It is also one of the best mulches for water conservation. However, the pine needles decompose quickly, and the mulch must be topped up at least once a year to maintain the minimum three inch depth as well as the garden’s appearance.

Advantages and Disadvantages of Pine Bark

Pine bark provides a longer lasting mulch than pine straw and still provides a high degree of moisture conservation especially when smaller nuggets are used. Like pine straw, pine bark must be occasionally topped up to maintain the needed depth and an attractive color.

Where to Use Pine Mulch

Pine mulch is commonly used in southern climates where pine trees grow naturally. The mulch matches the natural landscape, and consumers receive the cost savings of the mulch being sourced locally instead of having to be shipped across the country. Because most pine mulch is harvested from the forest floor or from pine trees that would have been cut down anyway, it is an environmentally-friendly, renewable resource.

How to Use Pine Mulch

Pine mulch can be used to enhance the appearance of a garden, protect a garden from weeds or dry weather, or to create natural paths through a yard or garden. For the initial application, a minimum depth of three inches is generally recommended with a depth of up to six inches in areas that are particularly dry or exposed to the sun. This depth makes it difficult for weeds to emerge into the sunlight and helps trap water that would otherwise evaporate from the soil.

When placing mulch around trees or shrubs, leave a minimum of three inches between the edge of the mulch and the base of the plant. This gap discourages rodents and other pests from eating the bark of the plant because it forces them to be out in the open in view of potential predators.

Creative Commons Attribution: Permission is granted to repost this article in its entirety with credit to Hydro Mousse® Liquid Lawn® and a clickable link back to this page.

Image courtesy of Vitolef at FreeDigitalPhotos.net

Want to join the discussion?
Feel free to contribute!

How to Rejuvenate Your Lawn with Bark Mulch
Scroll to top